With Kemba out until at least March due to a surgery on his left meniscus, it’s time to look at relevant topics concerning the guys who are now filling his shoes.

I did an overall take on Brian Roberts’s performance back in December, concluding that I am fine with him as a back-up point guard. His shooting is good enough for him to have a place in the league while his defense is passable, something you actually can’t say about many back-up guards.

My biggest concern about him as a starter though was his inability to constantly create. Roberts isn’t up to par athleticism-wise when compared to other starting point guards and his ceiling in the pick-n-roll game mostly is a pull-up mid-range jumper. Walker’s ability to get us a shot in the pick-n-roll means a lot to our offense, it especially being the case when Al was out. By no means is Kemba consistent with his shotoing, but it’s not like we have many other options on the offensive end of the floor.

So far the starting line-up with Roberts in Kemba’s place has posted a whooping offensive efficiency of 107.6 points per 100 possessions. It’s a figure that I expect to decline with our offense continuing to heavily rely on Al Jefferson (and with us not facing sleep-walking teams like Denver… geez, they looked apathetic out there).

My main take-away from this stretch though has been B-Rob’s (an unbelievably mediocre nickname used by our otherwise great broadcasting team) defense. He’s looked a bit over his head when facing elite point guards.

Perhaps, the main reason why we can be one of the best defensive teams in the league is the ability of our starting wings and guards to deny the middle. It all starts from there as MKG, Gerald Henderson and Kemba keep penetration by opposition to minimum.

Roberts hasn’t looked ready for the job as he has committed a lot of unforced errors when having to execute the task at hand. The Tony Parker’s of the world will be able to get past you in a split-second, if given the chance, and from that point on everybody has to scramble to salvage the defense.

The Spurs didn’t capitalize on all of those three possessions but you have to agree that it’s unlikely they would go 0/3 with those chances the next 10 times.

There are other times when Roberts realizes that he has to “ice” the pick-n-roll when it’s already too late to successfully do so.

Meanwhile, when trying to station himself in front of the screen in a timely manner (to “ice” the pick-n-roll), point guards have taken advantage of Roberts by throwing a mean hesitation or fake his way.

It kind of goes hand in hand with his poor close-outs on which Roberts has also made mistakes by not being ready for the possible upcoming penetration through the middle.

Closing out on the point guard after the ball has been swung his way is a task at which Kemba is a demon at. Few try harder and tip-toe more aggressively, in order to be ready for any kind of action by the assignment, towards their man than Walker.

We might have not given up that many points in these plays but the breakdowns are there and if repeated they can be very costly. It did though seem to me that John Wall, and the Wizards as a whole, were a bit lackadaisical against us so, perhaps, there’s nothing to it, however, Brian seemingly was more ready to execute these tasks against Wall.

Either way, it’s definitely an aspect of the game that requires further monitoring.

Despite his ability and willingness to facilitate, I’m not really fond of Stephenson as the primary ball handler for the second unit. That’s not to say that we have better options on our roster. It’s just something that I would try to avoid in the future as a GM or a coach.

If this makes any sense, I feel like Stephenson wants to be the one who makes THE play too much. The way he approaches the possession of the ball is the one of a player who’s keen on ending the attack himself. Whether it’s him hot-dogging and attempting something spectacular, his moves taking way too much time or him threading the needle with his passes, they all are plays that have a large probability of being the last ones of the possession, that either being a turnover, an indeed open look for a team-mate or a situation where Lance has made up his mind that he will be the one who shoots the ball.

His shooting woes require no analyzed documentation. Stephenson has been very bad, even if it is a product of an injured groin. For example, he ranks last in the league in catch-and-shoot FG% by posting an unbelievably horrible 12.7% on such shots.

And that’s something that really hurts him. It’s hard to be a particularly good primary ball handler in today’s NBA when your shooting isn’t worth a lick. You have to be quite the passer to be a net positive and while Lance can pass, he isn’t exactly elite at it due to mistakes that will be further discussed and the fact that he tends to stall the offense when going to work (the aforementioned tendency of trying to make the “THE play’).

Look, he brings plenty of things to the table when taking on the role of the distributor. Biyombo has found an alley-oop game thanks to Stephenson, who has assisted Biz on 37.5% of the center’s field goals where there was an assist from a team-mate. He would also be the lead assist-man to Zeller if Kemba hadn’t clocked 300 more minutes with Cody on the floor than Lance.

However, with the good he brings, there is also a lot of bad, even if forget about the rest of the context and focus on the passes themselves.

Lance tends to set his sights on a possible pass way too fast by seemingly deciding that this will be the play he’ll make. Per example, him unsuccessfully trying to split the pick-n-roll with a pass frequently ends in a turnover.

Stephenson will also force passes in less understandable situations than the pick-n-roll. His body language and reaction after the supposed turnover by a team-mate leaves much to be desired.

The frequency of his turnovers rank him as the 8th worst among 48th comparable distributors in turnover ratio, the number of possessions a player averages per 100 possessions (Kemba has been the best among this group).

By this point the sample size also is large enough to question his offensive value. There just has to be a reason why he has the worst offensive rating on our team.

His possible role on the Hornets (with such lack of shooting) is a situation you could call a catch-22. I’m not sure about the prospect of him being the primary ball-handling option, but then again he seems to be a bad secondary or third option, given his poor shooting and preference to handle the ball himself.

Neal also getting some run at the point, I guess I should touch on the situation regarding him as well.

I chose to be blunt though. I’m not hyped about playing him as a point guard when he possibly is having the worst shooting season ever and is mostly limited to very long twos off screens.

Even if his performance has been acceptable the last three games, his usage rate rising to Kevin Durant-like levels (29.1) after Kemba’s injury seems troublesome.

There hasn’t been a real reason for me to write about Vonleh since he has clocked 84 minutes for the season. The garbage time minutes here and there just don’t provide you with anything substantial from which you could make solid arguments and judgement.

Even with that being the case, I’m still salivating over the defensive potential of a team that has Biz, Zeller and Vonleh as their bigs.

The man is huge yet can visibly move around the floor on defense. Hedging against the pick-n-roll or stepping out to the perimeter doesn’t seem like a problem to him.

He obviously lacks experience and the rookie mistakes are there, but his athleticism allows him to disrupt offensive players even after letting them to the middle and then falling for a pump fake, to boot.

Biz Putting the Mack in Bismack

Biz has been very encouraging and involved during these past few games as an injured and inactive player.

A huge part of what makes this so enjoyable is his look. I love how he has gone the no tie, two buttons open way. 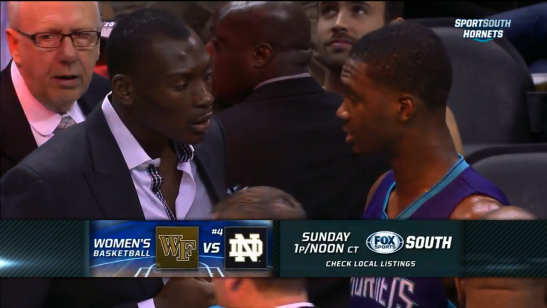 Lolcat Play of the Week

It’s almost too easy to go with an Al Jefferson defensive play, but I found the lack of hustle by Big Al on this play hilarious.

(Yes, I do know that the two points eventually were rescinded.)