The state of the Al-less Hornets was pretty much covered two weeks ago. To summarize, while our starting unit faces concerning spacing issues on offense that forced Kemba to create a whole lot on his own, it also employs an awesome combination of defensive talent that can force players toward the side-lines, hedge pick-n-rolls, if necessary, and protect the rim.

I did, however, add the caveat of us having to face the Raptors and the Spurs in the future after some of these stifling defense performances came against lesser teams. The team did survive the test. We gave up 95.0 points per 100 possessions against the Raptors, while our defensive rating against the Spurs was 96.3, both equivalent to being the best defensive team in the league.

The Kemba/Hendo/MKG/Cody/Biz line-up has also retained its level of pathetic Philly-like offense (offensive efficiency of 92.2) and out-of-this-world defense (88.7).

While Bismack repeatedly rejecting Spurs guards to the point that Pop expanded on this particular event by calling it humiliating for his players was a much more sexy defensive performance, I would like to highlight Cody Zeller’s perimeter defense against the Pelicans.

It’s a subject and part of Zeller’s game that I’ve been praising all season long, but I can’t get enough of it and it seems even more suitable to cover after this stretch of games. As previously mentioned, compounding Hendo’s or Mike’s ability to deny the middle with a big in Cody mobile enough to successfully hedge can cause the offense some real difficulties:

Also, note how good Kidd-Gilchrist can be at forcing the ball handler away from the middle by watching the second play of the montage. Tyreke Evans doesn’t exactly try to will himself past MKG at all costs, however, Mike’s unique ability of being able to get back in a defensive play, already mentioned in the last column, does alter his plans. He wasn’t in a position where he could timely ice the pick-n-roll (that is, step in front of the screen), like Hendo and Kemba do in the other plays, yet he still manages to stop Evans’s movement after having to react to it on-the-fly: 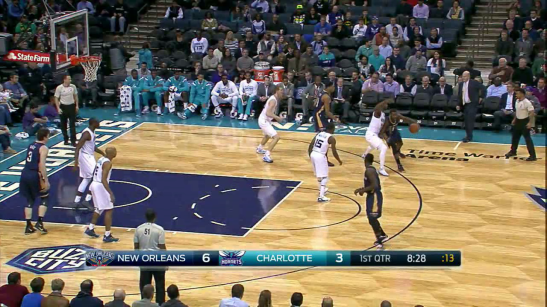 And this is stuff that matters when you play our style of defense where we try to keep action to the side-lines. When you fail at executing that against the likes of Spurs or Raptors, you get burnt:

Unlike, per example, the Cavaliers or Raptors, where in the pick-n-roll penetration to the middle is permitted and is met by a hedge, our next option is a no-no in a Thibodeau-ish defense as a perimeter player can decide to help out from the strong side, yet he will leave a possible shooter wide open.

But, hey, the examples aren’t a form of criticism. We’ve been really good at executing this as of late (as well as last year, Hendo certainly is better at this than the often-wandering Lance Stephenson) and these are basically the only examples I could scribble down while charting our games against the Raps and the Spurs.

The Return of Al Jefferson

Obviously, I can’t talk about the previous subject without acknowledging that Al Jefferson returned to action during our last game.

I almost feel like the larger conversation here is unnecessary. We’ve seen the team without Al and we’ve seen it with him on the court. The offensive boost will be there with Jefferson starting, yet it’s easy to understand what will happen on the defensive end.

Thing is that I don’t see coach Clifford committing any more considerable minutes to Biyombo, even after this successful stint of games. “Jefferson brought play-off basketball back to Charlotte” and “we can’t score without running the offense through Al” are the narratives at work in this franchise and any considerable rotational change concerning the two centers would surprise me.

At this point, what I want to write about is how surprisingly quick Al’s comeback. What was predicted as an injury that would force Al to sit out at least four weeks, ended up with Jefferson back on the court just before three weeks would have passed.

Coincidentally, Jefferson didn’t seem to have a lot of oomph to his step. These shots looked horribly flat:

On the other end of the floor guards, of course, were crossing him over to the middle on his drop-backs against the pick-n-roll. I don’t think I even need to harp on this any more.

Here’s wishing that Jefferson is brought back a bit slower than I expect it to happen. Biyombo defending with the starters and Al being less exposed on defense (and beasting on offense) against lesser centers could provide us with some interesting data and footage.

(Side-note – by no means am I criticizing Al himself for the fast come-back. I appreciate his professionalism and willingness to get back on the court just as I did during the post-season when he played through his foot injury).

Toronto’s Defense – A Breath of Fresh Air for Kemba

To my eye the coaching staff and Kemba were ready for Toronto’s pick-n-roll defense, which as mentioned previously, gives you the middle, yet welcomes the ball handler with a hedging big man.

After having some tough battles of basically going one-on-two in the pick-n-roll (written about in the last column, which now probably seems like a more regular mention than a Jalen Rose breakdown that starts with a hip-hop song chorus reference), Toronto gave Walker all the freedom he must dream about.

Two cool plays of him, first off, darting past the Patrick Patterson hedge without even really acknowledging it and then switching it up later on by splitting the defense after a now expected more aggressive step-out by the big:

Marvin Williams Getting Funky off the Dribble

This topic has been my own little type of “apologies to Marvin Williams, we ran out of time” all season long. Always bumped to the next column, always seemingly too insignificant to write about.

Marvin is shooting a very solid 50.0% from the field after taking one dribble before the shot and 64.3% after taking two. Those particular types of shots amount to 0.8 field goal attempts per game and the sample size is why I kept dismissing it, either expecting the percentages to go down or the funky attempts becoming a more rare thing.

But, to Marv’s credit, he’s adept at making savvy veteran moves when noticing that the defender who’s charging at him is a bit out of control and he’s usually good for a cool one of these every two or three games:

Moreover, his fit as a whole has been a lot better after joining the bench squad. I’ve previously expressed my love for the Roberts/Neal/Williams/Biyombo line-ups, which feature the fun dynamic of Marvin and Biz, two completely different pick-n-roll options where Biz can suck in the weak-side defender to open up Marv:

Williams’s numbers though have been up as a whole ever since he got “relegated” to the bench. His net rating (102.7 – 98.3 = 4.4) has been among the best on the team and is on par with his power forward counterpart, Cody Zeller. Whenever he’s not on the court, we’ve suffered almost Kemba-like dips in our offensive production with our five guys on the court being able to scrap together only 95.4 points per 100 possessions.

You may remember how I highlighted this side pick-n-roll with Marv and one of the bench shooters as a dangerous play:

Well, similar stuff can also free up others like in the case where Neal curls into a pick-n-roll with Williams:

Williams’s somewhat clutch shooting has also helped, with him making 10 out of his 18 field goal attempts (55.6%) during the last 5 minutes of the fourth quarter or overtime when the scoring margin is between 8 points, according to Basketball Reference.

Obviously, the elephant in the room is his contract. I’m sure that part of the seven million per year deal is the supposed credibility his name has. It also carries additional extras (like the a fore-mentioned ability to put the ball on the floor once in a while or being acceptable at fronting huger players when, in fact, Williams really is a slow small forward) that don’t quite affect the bigger picture, yet come in handy and might not be there if you signed a lesser name.

Averaging less points per game than millions earned that season isn’t exactly the ratio you’re looking for or the salary you want to pay a bench player. But with the contract ending before the summer of 2016 when the cap is expected to significantly go up, the deal can at least be consider as passable following the fit that Clifford has found by playing Marvin with the bench unit.

Tiago Splitter Faking Biz and Cody Out of Their Shoes

I can’t even get mad at the guys for this. Just too damn Spursian.

Lolcat of the Week

A very special edition of the “Lolcat Play of the Week” (or rather “last two weeks” in this case) as Gary Neal has repeated the feat of Lance Stephenson by not only excelling with one especially bad play but by his whole body of work being bad enough to label him the “Lolcat of the Week”.

The play to earn him this recognition came in our Toronto game where he followed up a dismissed lay-up attempt by stepping back to shoot a three on a 2-on-1 fast break. Clifford responded by benching Neal for the rest of the game:

Fortunately for Neal that was the second-to-last game of his historically awful three-point shooting streak, where the player attempts at least one three-point shot in X number of consecutive games but doesn’t shoot better than 25% from long range (going 1/4 thus can thus be assumed as the best possible outcome in a game during this streak, however, 0/1 might not sound that bad as well when the shooter is missing his attempts either way).

The following is data from Basketball Reference:

Let’s just face it – we might have changed our name to the Hornets, but we’re the Lolcats for life. Two names from the same team during the same season on this list is an unbelievable feat. Especially when Gary Neal is by far superior as a shooter than anyone on here, unless you loved Uncle Cliffy’s twilight years.

I’m sorry, Gary, I don’t have anything against you and I wish your shooting returned to your usual percentages. But this has been a very bad slump. You’ve been a true lolcat…