It was easy to hate on Jason Maxiell this season. He was supposed to be the 15th man, veteran leader, towel waver, locker room leadership, unguaranteed contract guy.

Instead we got a player, clearly past his prime, backing up Al Jefferson for the first eight games of the season in the place of our shot-blocking lottery pick. The reasoning for this still remains unknown (oh, I’m sorry, the usually hustling Bismack Biyombo hadn’t been bringing defense and energy in the pre-season) and at the time it even angered me enough to write a column on how Maxiell clearly shouldn’t be stealing Biz’s role and minutes.

Even with that settled we still had already experienced 100+ minutes of Jason Maxiell and plenty more was to come with injuries all across the roster. A 32-year-old chubby big missing dunks, yet receiving playing time is bound to generate some disapproval.

NBA.com does confirm that I went through my game notes correctly and got every one of Maxiell’s missed dunks (that’s not to mention the few times he barely got up there, yet the ball did go over the rim). Eleven makes and four misses put his percentage on dunks at 73.3% (11/15).

It means that Kyle Korver and Luke Babbitt produce more points per a three-pointer attempt than Maxiell does per a dunk attempt. And that’s me being kind and not counting attempts on which he got blocked or stripped off the ball, yet presumably was going for the jam.

Even when he was effective for us and crashed the offensive glass, it looked bad. There are the athletic and beautifully-timed Tyson Chandler tap-outs and then there’s this.

I’m sorry but it looks like an exhausted senior playing his fourth set of beach volleyball and barely being able to spike the ball over the net.

Our offensive rebounding percentage with Maxiell on the court actually was quite good. A team that struggles on offense so much like us probably could consider crashing the glass a bit harder for second-chance opportunities next season. Under Clifford we’ve religiously abandoned the glass in favor of transition defense. At 22.1% we were the second shiest squad in offensive rebounding percentage. With Max on the court that percentage (25.5%) is equivalent to the 12th best rebounding team.

Last, but definitely not the least, is Coach Clifford pulling the double-whopper of denying minutes to another lottery pick (Noah Vonleh) in order to play Maxiell. That’s two in one season.

I mean, look, I can understand a coach, especially a defensive-minded one at that, having concerns about a 19-year-old’s readiness to contribute for a supposedly playoff-bound team. Especially when the team in question starts the season off at 6-19 and spends rest of the year in an up-hill battle. Add a sports hernia injury to the equation and you’ve got yourself a passable excuse for not playing Vonleh. I haven’t been at practices and haven’t seen how well he can execute whatever the coaching staff wants him to do. But this happening in the 59th (!!!) game of the season is inexcusable.

I’m sorry, but there are absolutely no circumstances under which Maxiell checking in before Vonleh did (in a 31-point blow-out) can’t be filed under “moronic”.

Unfortunately, this wasn’t the only occurrence. If I went back and accounted the garbage minutes which Maxiell inexplicably played in the place of Vonleh I’d have to cry. The memory of the camera catching Maxiell by the scorers’ table in this particular game is hilarious enough to stop there.

Is any of this Maxiell’s fault? No. He went out on the court and busted his ass or whatever is your idiom of choice. It’s on Rich Cho for supposedly signing someone very well-deserved of the 15th man role when, in fact, Noah Vonleh was injured and one of the other four remaining 4s and 5s is effectively a small forward masking as a power forward in Marvin Williams. Maxiell was due to get some minutes.

It’s also on Steve Clifford for being the stubborn coach he is and, as evidence by Vonleh’s play down the stretch of the season, giving Maxiell a steady diet of minutes when our own rookie was capable of the same production, if not more. Collectively Cho and Clifford managed to be the first people who broke the always flawless Basketball Reference.

It’s to be seen whether this was Maxiell’s last season as a pro in the NBA, yet he shouldn’t have accumulated 878 minutes. If nobody signs him or he retires, I bet that there aren’t many players who’ve come in as 15th men, yet ended up playing 800+ minutes.

I have to stress the fact that I’m not ridiculing Jason Maxiell as a basketball player. If anyone is still indeed interested in a more detailed breakdown of his defense then I stand by what I wrote during the start of the season in the aforementioned Maxiell vs. Biz column. Jason certainly knows how to play. His body is just not be able to execute all of those wishes anymore and it’s hard to constantly be up to par with your competition if you’re his age and weight at 6-7.

The only thing that I would, perhaps, stress a bit more when re-visiting that column is that while he knows to box out and is a hard worker at that, line-ups with Maxiell as the center really struggled to secure the defensive glass, a staple of our humble success.

Other than that, I would actually find me questioning myself about whether I was too harsh on Maxiell since some games he’d look just fine. But then there would be times when someone like Victor Oladipo sensed the opportunity he has with Maxiell guarding the pick-n-roll and would go at him repeatedly.

Otherwise, the only real qualm I would have with Maxiell is his screen setting and even that might be splitting hairs. Sometimes it seemed like Jason is too focused on slipping the screen in the pick-n-roll and darting to the basket, when I’d wish that he’d moreso use his wide body on separating our ball handler from his defender.

He can time the “slip” just beautifully but even then at 32 years of age he’s not the ideal player to close out an offensive possession. The same would apply for off-the-ball screens where his lack of speed might have bothered him to be able of setting a proper pick in a split-second on a unsuspecting defender. Perhaps, he reckoned that a late pick is worse than no pick at all.

Such late shoves just added to the overall outlook of him being washed up athletically. 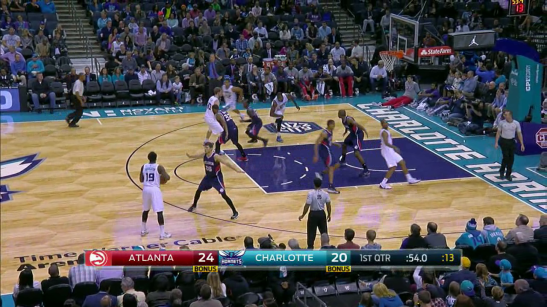 This entry was posted on April 17, 2015 by ReinisLacis in Charlotte Hornets blog and tagged Jason Maxiell.