With us getting closer and closer to the post-season and there being less opportunities for me to present new material regarding the team as a whole, I’ve made an executive decision to switch to types of columns that moreso concern individual games. Upon planning for the last blog entry that covered another two weeks of Hornets basketball, I realized that I had seriously botched the column by waiting for so long.

By that I mean the fact that I found the Celtics and Magic games the most fascinating, yet at the time of writing they would be badly out-dated (admittedly, I didn’t have much of new opinion on the rest of the games). My game notes more frequently have started to resemble a write-up of information that applies for the player’s whole body of work, instead of some particular trend within the last few games. It seems that at this point writing about Cody’s great hedging on pick-n-rolls (something we should have gone to in Boston, instead of playing the inept Maxiell and Marvin) or compiling Lance’s latest hissy fits would be redundant.

Thus we move to a new format and slowly prepare for games as huge as the Miami ones (or, obviously, the playoffs) where a separate column should be written. Besides us making the post-season, the only thing I wish for is having enough free time away from work and university to provide you with such material.

As noted before by Charlotte Observer’s beat reporter Rick Bonnell, coach Clifford will be willing to play the two point guards alongside each other. It’s hard to determine at this point what the rotation will exactly look like since Kemba’s still on a minutes restriction or for that matter what our closing line-up will look like (even though I do sense that Mo will take on the Gary Neal role and be inserted for offense down the stretch).

The first taste of such line-ups produced expectable results as the two clocked seven minutes on the court together and those line-ups posted an offensive rating of 130.0 (while giving up 126.6 points per 100 possessions).

Before diving in some of the plays from last night, I have to clear up my stance on this duo being played together. I like the idea, yet it definitely should be used only against certain teams. What I cannot stress enough is that I don’t see this working if they ever hit the floor in fourth quarters with Marvin Williams alongside them. We’ve managed to recover on defense after a forgettable start to the season and be one of the top3 most stingy defenses since Cody’s insertion in the starting line-up.

That’s been our key to success as much as anything else. A line-up of two physical wings who deny the middle, a big who understands where to be and can swiftly recover from hedging a pick-n-roll to protecting the rim the next second and a pesky point guard (his ADHD-like breakdowns notwithstanding) can cover up for Al Jefferson’s defensive deficiencies. Mo and Kemba being small for their own position to begin with puts us in a scary position if Clifford considers Marvin to be the right choice in a close game (as he has done before).

We already saw baskets given up due to the back-court’s small stature. Here’s Mo stumbling on a close-out on Omri Casspi which gave the 6-9 forward enough space to launch a three over the point guard:

It also can feature a trickle down effect as Lance saw minutes at the three spot which was an opportunity that Rudy Gay used to his well-being.

What excites me about this experiment is the duo’s capabilities on the offense. As we’ve been starving for a good offense ever since (what’s the right way to conclude this sentence? since Glen Rice???) god knows when I feel like their double punch is a necessary breath of fresh air for times when we struggle to score. The Thibodeaun conservative defenses of today are built for pushing the primary action towards the side-line and forcing offenses to swing the ball towards the secondary ball handler, someone likely to be less competent. In such a scenario we would have a pretty damn good release valve who’s capable of creating his own shot during the split-second the defense recovers back to the weak-side.

Their first seven minutes together with one another obviously didn’t produce an abundance of such examples, with this being the most similar play

It isn’t exactly the type of forced ball swing I was referring to, however, it does show off how fast these two can make the ball switch the side of the floor and create a new opening for a pick-n-roll. Williams’s defender gets hit with a Biyombo pick rather unexpectedly.

The highlight of their stretch together definitely is this dribble hand-off which the Kings foolishly expected to cover with a half-assed switch, only to realize that Mo has a shot release way too fast to be neglected in such a manner.

I found two of Biyombo’s last night’s blocks to be particularly outstanding. These two plays just had to end in four points. It seemingly was too late to protect the rim.

Here’s Bismack realizing that an alley-oop is about to occur. The pass has almost made half of its journey, Ray McCallum is already in the air and Biz hasn’t even turned yet, not to even mention the possibility of him getting across to the paint: 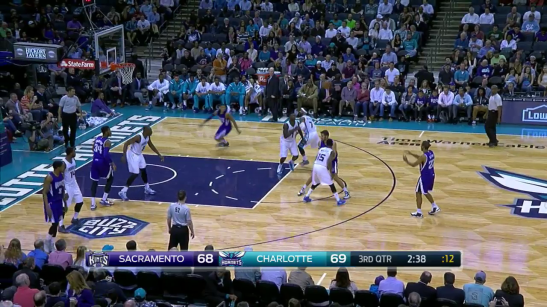 Or how about him doing a small and unnecessary hop in anticipation of a Ben McLemore drive, yet recovering from it to deny Jason Thompson: 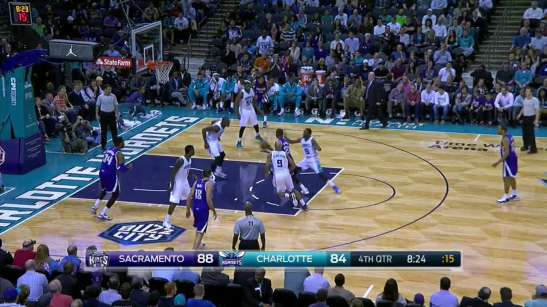 His re-jumpability sometimes is Dennis Rodman-like. And that’s coming from someone who, for better or for worse, has Rodman as his idol in life.

What I believe was the main reason for the Horncats letting this game slide away was our wings, mainly Gerald Henderson, not being able to keep up with McLemore through off-ball screens. Now, the fact that he was Ray Allen-like didn’t help either. McLemore punishing us with timely drives the times his trailing defender went over the screen in order to not give him open jump-shooting looks was unexpected.

There were plenty of mistakes on our part as well though.

Here’s an unwarranted lazy switch by Gerald Henderson on a play where it’s safer to just stay with your man in case your team-mate isn’t ready for such course of action (and rightfully so Mike wasn’t):

I would say that going under screens set for a shooter like McLemore is a definite no-no:

Moreover, we helped his cause with our share of mistakes in the transition. Here’s Hendo falling asleep:

It wasn’t as bad as Lance Stephenson though, the author of our Lolcat Play of the Night, who admired his brick from long-range just a second too long to be forced to give up this easy two. Unfortunately, a gentle tap and a technical accompanied it:

I wouldn’t call Gerald’s last night’s passing anything out of the ordinary. He had a couple of nice finds, yet two of his eleven assists came in situations where Kemba had to take a three to beat the buzzer, two more had him act as the middle man in a play where the pass to the open jump shooter was only understandable.

Yet he’s averaged 4.6 assists per game over the last 14 affairs and it might be something that I should re-watch for a more in-depth analysis and take on things.

Rick Bonnell’s article indicates that Al’s calf injury is not serious and is likely to keep him out for about two weeks. Disregarding the news, my short take on the state of the team without Jefferson either way would be such that we’re glad to have Mo Williams. My January’s column on the Al-less team basically concluded that while our starters with Biz as the center are freakishly good on defense, every possession is hard work for Kemba.

During Jefferson’s down-time we scored a Philadelphia-like 93.9 points per 100 possession whenever Walker rested. With Mo Williams on the roster, we are capable of putting a fine creator on the court for the whole 48 minutes or even playing the two together for extended stretches (a much better proposition if they share the court with MKG and Biz).

Given our defensive prowess and the sad state of the Eastern playoff run, we shouldn’t suffer much from Jefferson not playing. I’ll go as far as saying that I much more anticipate Zeller’s comeback than the one of Big Al.