A bit late this week considering that we started the season on a Wednesday, but I guess there is no harm, no foul since we only play the first game of the so-called “week 4” tonight, on a Friday. Either way, a return to the more random format this week – just some likes and dislikes.

Pin Down Screen on Lance

You can file this both under likes and dislikes. By my observations (and someone can correct me if you noticed this earlier), Clifford added this little wrinkle to our offense after week 1 during which Lance posted two 2-point games and sat two fourth quarters. It’s simple stuff but seems like a good set from which Lance could get easy opportunities to get to the rim by being in motion coming off a screen and having less distance to cover (more distance tends to result in Lance over-dribbling): 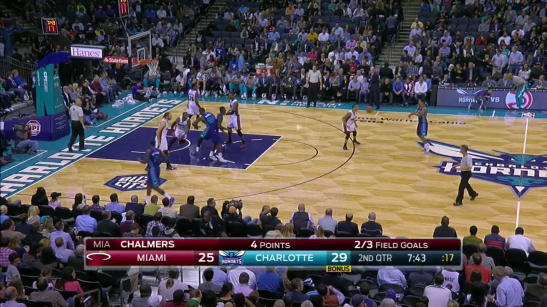 There’s a lot of fun stuff you can do coming off this pin down screen. Lance can catch it while curling towards the basket (hasn’t done it so far) or run a funky foul line pick-n-roll with a big (this will be attempted from time to time). The problem is that Stephenson from time to time will manage to even turn this play into a long isolation concluded by a so-so step-back jumpshot:

In related news, Lance is 78th among 81 players who attempt at least 3 pull-up shots per game (and have played more than 5 games) in FG% percentage (26.4%). I know that during week 1 I wrote it off as Lance searching for ways to contribute and forcing it a bit, however, he’s continued his shaky decision-making regarding shot selection even when being put in better situations. It’s worth mentioning that 15% more of his shots have come from between 10 feet and the 3-point line than last year, while he has made 14% less of those looks.

Here’s how this set looks when it creates a bucket (perhaps, continuing with a pick-n-roll and not relying on Lance’s one-on-one abilities is the solution to get something out of this set). Notice how the first highlight is a reverse way of running this play – Lance himself sets the pin down screen and then turns for the post-up:

All in all, I welcome this kind of creative play running which puts the emphasis on other players besides Al. We’ll see whether Stephenson gets better at it with time.

Big Al Looking a Bit Off

This is strictly a gut thing but some details with the way Al has played are bothersome. To me it has he’s a step slower. Upon some research (according to stats.nba.com) on his quickness in the post the feeling was somewhat confirmed. His frequency of shots after 0 dribbles are down from 57% last year to 50% and the frequency of touches under 2 seconds that ended with a shot are down from 53.2% to 45.9%. I would call those two areas such in which you’d like to see large percentages for your big men, lesser time with the ball in their hands would indicate looks where they didn’t have anything to over-think, an open and simple look close to the basket. (If you want to point out that Al usually gets going as the season goes along, I’ll admit that he does, but will note that his numbers in “shots after 0 dribbles” and “touches under 2 seconds” were the same last October and December as they were at the end of that season.)

Also I’m wondering is it just me or Al didn’t have such horrible misses last year? I’m certain, by the way, that I’m missing at least one more air-ball:

There’s almost no use in writing about his defensive woes since they’re well documented but it’s always hilarious to see a replay of a particularly bad possession on D by Jefferson. Again.. it’s just my gut, however, he seems even more like a man restricted to only one set of movement who is physically incapable of getting back into the play after the primary action taken by him:

And this is just one for the ages. I understand that he’s expecting a pick-n-roll, but this looks incredibly bad…

I almost want to apologize for this paragraph and its lack of substance. It’s almost like an excuse to use some bad footage of Al. But it’s worth noting that our defensive rating with Al on the court is 107.2 (third worst behind Biz and Hairston) and 97.5 (a stand-out best) with him off it. Last year’s difference was only -1.0. I’ve begun to feel like we can’t replicate our last year’s success on both ends on the court with Al on it. He’s seemingly looked worse on defense and his offense isn’t near his unstoppable levels he reached last year. Besides…

…The Starting Five’s Spacing Doesn’t Help Him at All

A small transition before I make a larger point. The warning signs were there and we knew about Lance’s ball-stopping habits which have him ponder his next move for 3 seconds and freeze the whole offense. But it’s always easier to take such things into account when it happens on your own team:

I know it’s early in the shot clock and he might have made the smart decision by not firing the three up. However, it’s still an often taken shot in today’s NBA and it wouldn’t be a bad shot by any means (not to mention the possibility of him driving to the rim). Either way, this is who we’ve added to our anemic offense and it’s an excellent example of how DeMarre Carroll can be four feet off Lance. Now tell me how can Alfense be successful when Marvin is off in the opposite corner (covered in week 1) which is hard (if not impossible) to reach with a cross-court pass and the majority of the rest of the guys won’t take threes…

The Starting Five with PJ Hairston

Man, it’s been refreshing to have Hairston in the starting five. Al/Marv/Lance/PJ/Kemba have produced 110.8 points per 100 possessions (a line-up Neal in PJ’s place is at 120.6) and it does make you think what the hell we should do with our wings who play alongside Al. The defense does suffer with Hairston or Neal (more on this in a second) or, perhaps, rather without MKG, but a shooter is very necessary on the floor when we play Alfense.

Here’s a possession where we finally have a damn shooter on Al’s side of the court from which opponents have been so fast to send a second man (I’d say faster than last season) and from which we otherwise usually send a useless cutter who runs by Al and only mucks things up:

For the rest of the game Harrison Barnes realized his mistake, which wasn’t even that bad as defenses are almost always more aggressive to double Jefferson than Barnes was. Just look how much he respects PJ’s ability to shoot in these two plays. He isn’t about to leave him open again even if that means rather premature movement back to PJ ignoring everything else on the court:

Hairston is launching 8.4 threes per 36 minutes and it accomplishes a lot. The perception about your shot is often key in the NBA and Hairston has proven that he’ll won’t think twice about launching a three whenever he touches the ball and the scouting report seemingly is out. The defenses will respect him. That’s something we haven’t had in our Alfense line-ups seemingly since the moment Al started playing for us. So just keep on shooting, PJ!

Don’t take this as a mean dislike from someone who couldn’t just be positive for a second. But it’s easy to see why that same Hairston line-up has had a 107.0 defensive rating. PJ is still going through his growing pains as a defender on the NBA level and he’ll get caught off-guard every game. Off-ball screens have been particularly difficult for him:

Golden State caught Hairston asleep on a typical out of bounds play of theirs that has had sleepy victims since Mark Jackson was the coach:

At this point I think we can be pretty sure that at least 80% of the time our final possession of the game after a time-out will be a Kemba Walker-Al Jefferson pick-n-roll. It happened again at Indy, it happened in New York when the Knicks picked up the foul they had to give only for Clifford to yell out “same one!” so the whole MSG crowd would know that the same play would be run the second time and it happened at home against Memphis (where Clif also ran the same play twice). A reminder on all of those instances (obviously, there also was the Milwaukee game-tying shot):

(I suppose that at 0:43 it’s the Knicks huddle alerting everyone by yelling “same play”…)

A definite Lolcats play of the week. This is a major dislike from me. Get more creative, Cliff!

Lolcats Play of the Week Runner-Up

A play that disgusted the RealGM game thread and which Fats (from the same board) wanted me to cut out. Let me quote myself about what I wrote in week 1 on Henderson playing side-line pick-n-rolls towards the base-line: “god forbid, Hendo ever saw a base-line jumper he didn’t like.”

By the way, I think the Lolcats play of the week should become a weekly thing. Just like this is…

Jason’s actually moving up in the world. I guess credit is due after that Indy game. 2.0 field goals allowed, 3.2 field goals faced which results in 62.9% opponent FG percentage at the rim. Bigs who face three FGAs and are worse – Kevin Love, Tarik Black, Gorgui Dieng, our own Marvin Williams (kind of unfair to include him though, so shout out to another SF masking as a PF – Luc Mbah a Moute) and Al Horford. Max is still among that bottom 5 or so though.

2 comments on “Hornets Week 3: One Like and Many Dislikes”